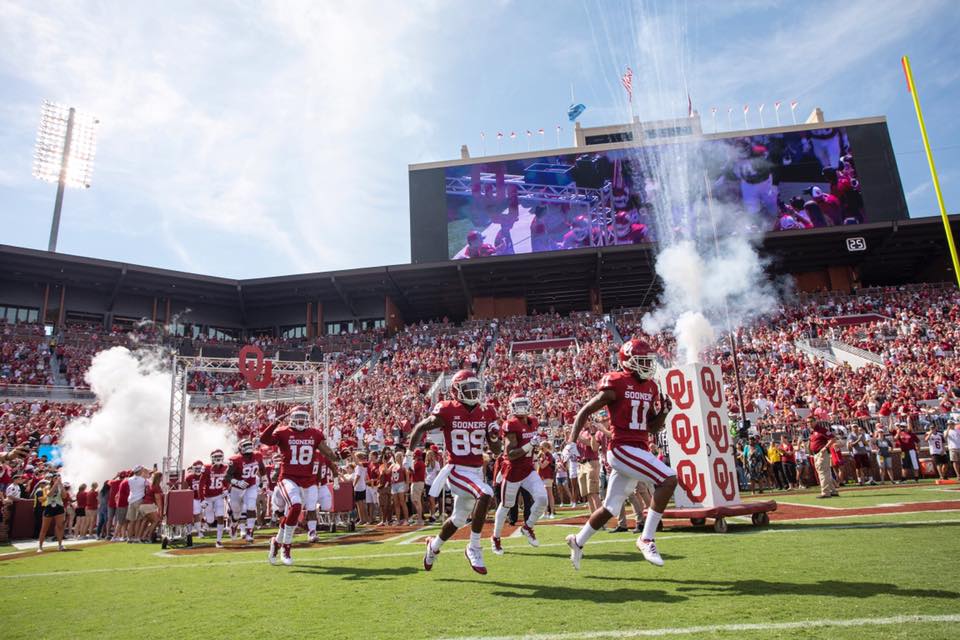 The Gaylord Family Oklahoma Memorial Stadium is an on-campus football arena in the University of Oklahoma in Norman, Oklahoma, US. More often than not, it is also known as Owen Field or The Palace on the Prarie. The stadium serves at the home of the Oklahoma Sooners football team.

The first game played at the stadium’s current site was in 1923. The Sooners won the game against Washington University by 62–7. However, Oklahoma Memorial Stadium was only built in 1925, when 16,000 permanent seats were built on the west side of the site. The name has been used since then in honor of university students and personnel that died during World War I. The facility was constructed at about $293,000. Furthermore, it was coach Bennie Owen that helped raise the money for the building. In honor of Coach Owen, the university named the playing surface Owen Field during the 1920s.

As of the 2016 season, the official seating capacity of the stadium is 86,112. It is the 23rd largest stadium in the world. Additionally, Oklahoma Memorial Stadium is also the 15th largest college stadium in the United States and the second largest in the Big 12 Conference. The stadium is shaped like a bowl, similar to most modern football stadiums. The south end was enclosed since the 2015-206 off-season as a part of a $160 million project.

There are two main reasons why the stadium was not originally a fully enclosed “bowl” like. First of all, access to the three outdoor football practice fields, which was at that time located behind the south end zone seats, would have been restricted by completely enclosing the south end of the stadium. Secondly, any enclosure would have forced the football field, which shared its outfield with the practice fields until 1982, to shorten its left field line considerably.

Later, in 1929, more permanent seating was added to the east side. 20 years later, the north end of the stadium was enclosed and the playing area was lowered six feet with the elimination of the running track around the field. When the stadium was completed, the seating capacity was at 55,000 in 1949. The addition of south end bleachers in 1957 brought capacity to just under 61,836 fans.

The playing field surfaced was replaced from natural grass to AstroTurf in 1970. The west side upper deck was added in 1975 and it features a lounge and a new press box. This increased the total capacity to 71,187 at a cost of about $5.7 million. Renovations to improve the stadium’s south end zone seating included new coaches’ offices and training facilities were added in 1980. In 1981, the playing surface was again upgraded and this time it was changed to SuperTurf.

Up until the 1980s, the NCAA had a tight grip on television contracts for Division I-A college football games. Only two or the most three college football games were televised each week and the schedule of games was set in stone well in advance of the season opener at that time. The NCAA reasoned that televised games impact the rate of attendance at the arenas. More TV games would cost more money in lost gate receipts than to be gained with television contracts.

However, by 1986, the Sooners and the rest of Division I-A were playing seven to ten games each season on television. This presented a new problem for the university and its stadium. This was after the University of Oklahoma winning a lawsuit against NCAA for its contracts with TV channels.

At the time, Owen Field did not have permanent artificial lighting sufficient for television broadcasts at night. Untelevised home games had to start in the morning or early afternoon so as to be completed by dark. It was calculated that the cost of leasing a set of portable lights was too high for a game that would not earn enough revenue to pay for those lights.

With the successful outcome of the court case against the NCAA, more late afternoon and night games were scheduled in Norman. Even television schedules changed during the season, requiring large portable light trucks to take up space on campus while waiting for the next televised game. However, it was not until 1997 that permanent television lights were installed in the four corners of the stadium. At the same time, a new south end zone video scoreboard to replace the antiquated main scoreboard. In 1994, Owen Field switched back to natural grass, or prescription turf, improving the field’s drainage system in the process. These two improvements were the only major improvements to the stadium for nearly 20 years.

More renovation plans began in 1997 to upgrade most athletic department facilities, beginning with a five-year fundraising campaign. Unexpectedly, the Sooners won the BCS National Championship for the 2000 season. Due to the win, the university received more freshman applications than it could house. Thus, along with other campus improvements, the refurbishment and expansion plan for the stadium was accelerated to be ready by the beginning of the 2003 season.

$12 million out of the $75 million cost of the stadium project was donated by Christy Gaylord Everest, current publisher of The Oklahoman and daughter of Edward K. Gaylord, in 2002. The stadium was renamed to its current name in honor of this gift. In addition, the Gaylords donated a total of $50 million to the university for the renovations made in 2000-2003. These donations included $22 million for a new building to house the College of Journalism. In 2009, the stadium welcomed The Black Eyed Peas and U2 as a part of the 360 Tour.

In March 2007, the OU Board of Regents approved a request made by the Athletic Department for $10.3 million to replace the displays and the sound systems of both the stadium and the Lloyd Noble Center. The improvements include the installation of a state-of-the-art Daktronics 16mm HD-ready video replay board in the north end zone. Other improvements included intsallations of digital 23mm LED ribbon displays along the edges of both upper decks, the north end zone, and the north tunnel entrances. Eight new concession stands were added, along with more than 60 new toilets in the women’s restrooms, 30 new water fountains, handrails on all aisles of the upper decks, new speakers in all restrooms, and a new public address system.

On March 10, 2015, the University of Oklahoma board of regents approved the initial construction of “Phase 1” to renovate Gaylord Family Oklahoma Memorial Stadium. The renovation was expected to cost approximately $160 million and it is anticipated to complete prior to the 2016 football season. Due to uncertain economic conditions, the board of regents decided to start the project to a later date, when things improved. “Phase 1” will focus primarily on the south endzone, football offices, training center and weight room. Where else, “Phase 2” will focus on the west side of the stadium, including the press box, club seats and new facade. As well as various improvements to restrooms, escalators and concessions. The first phase of construction was what made the stadium into a bowl, bringing it to the current total capacity to 83,489.

Ticket Policies:
Read up on the ticket guarantee and our chosen ticket marketplace on the Oklahoma Memorial Stadium tickets page.